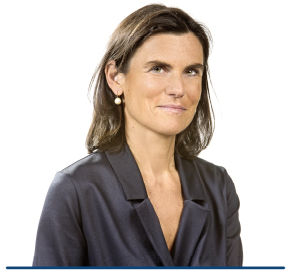 Bénédicte JACOBS obtained her candidate of Law degree with distinction from the Facultés Universitaires Notre-Dame de la Paix in Namur. She graduated with distinction in 1996 with a licentiate in Law from the KU Leuven.

During her education in Leuven she participated for one year in the Erasmus programme at the Universidade de Coimbra in Portugal.

Bénédicte Jacobs began her career as a lawyer in September 1996.

From 1999 to 2001 she was employed at the Massachusetts Institute of Technology (MIT) Admissions Office in Boston (USA).

In the fall of 2001 she resumed her activities as a lawyer at the Leuven Bar Association.

In 2004 she joined the office of Carl Devlies.

In addition, she is regularly appointed as temporary administrator for vulnerable persons of legal age.

Bénédicte Jacobs offers her clients a great readiness to listen and a clear analysis. Her partially French-language education makes her well placed to follow up the office’s French-language cases.

She has a command of Dutch, French, English, and Portuguese.